A solo female travel blog to inspire and guide you to travel and also motivate all through the journey. 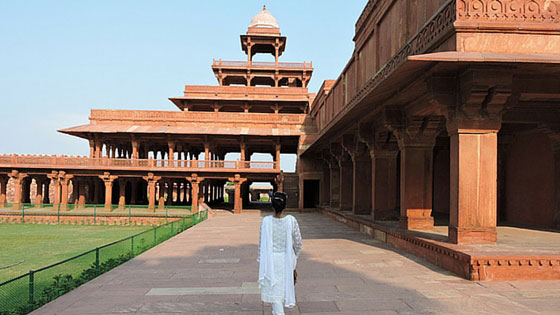 The fascinating city of Fatehpur Sikri is a popular tourist destination in Uttar Pradesh, India. The red sandstone city is just 35 km away from Agra. Fatehpur Sikri is one of the classy Mughal Architectures and built by Emperor Akbar in 1569. He ruled 12 years here between 1571 and 1585. During that time, this city was the capital of the Mughal Government. So what are those top tourist attractions in Fatehpur Sikri?

UNESCO’s World Heritage Site Fatehpur Sikri got some top attractions with the fantastic architectural design. Here you can get a unique combination of beauty in Indian Mughal architecture with a mix of Islamic, Hindu and Rajput style. This city got a history of victory and emotion behind its origin.

Emperor Akbar was not blessed with any children until he met one Sufi Saint named Shaikh Salim Chishti in Sikri. By the blessings of this Saint, Akbar’s Hindu wife Jodha Bai gave a birth to a baby boy, Salim. And then Akbar with his all respect and love for Saint Salim Chishti shifted the Mughal capital here and named the city as Fatehpur Sikri (The City of Victory). Later, he built one Shrine (Dargah) and here is the tomb of Shaikh Salim Chishti. This is now one of the tops visited religious spots and attractions in India.

Things To Explore in Fatehpur Sikri

I had no idea about the inside and outside beauty and history behind the deserted city Fatehpur Sikri. How fascinating can be old architects and history behind all? And Mughal architecture got its own class, and I understood that very well during my exploration. I loved the longest attractive architect of Buland Darwaza, the loving and powerful history behind the Dargah of Shaikh Salim Chishti. The love and devotion of prayer in the Jama Mosque beside the Dargah are worthy too. 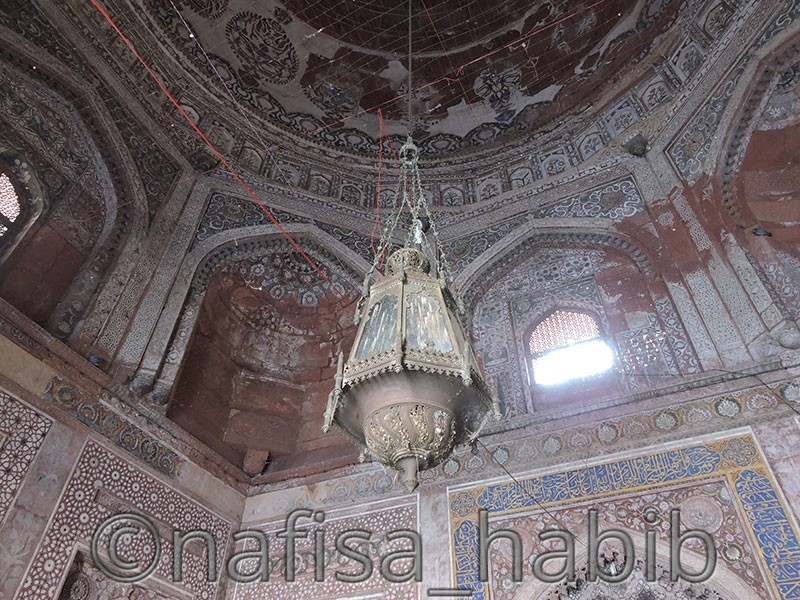 While I was walking through the long walkway to visit the Dargah saw the Anarkali Darwaza. From this secret place, beautiful Anarkali was forced to leave this city without knowing anyone from the Mughal dynasty. She was the love of Akbar’s son Salim during that time, but it brought tragic ending. I saw the Bollywood movie Anarkali (1953), and it reminded me of the history of that time. 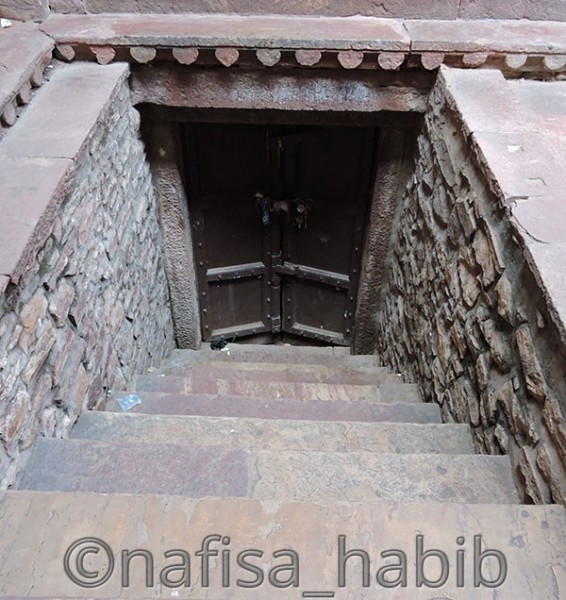 This is the spot (outside the Dargah and Mosque Complex) where the famous Bollywood movie Pardes (1997) filmed. There is one song (Do Dil) from this movie was very popular at that time.

I enjoyed exploring all the palaces and architects inside the Akbar Palace Complex. Here Panch Mahal and mesmerizing beauty of the Central Carved Pillar in Diwan-i-Khas just hypnotized me. Please, I’d love to be uttered again; I’m in love with the old architects 😀 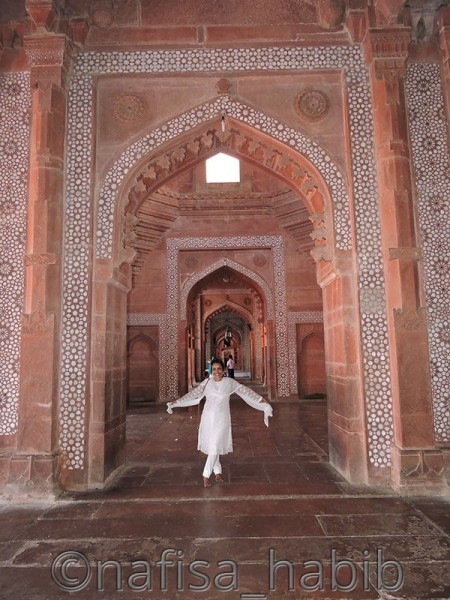 I entered the city through the tallest and largest door in India, and this is Buland Darwaza. This amazingly beautiful Darwaza or Victory Door is 55 meters high and built in 1575. This is a great combination of Mughal and Persian architecture. This door is also one of the largest gateways in the world. The reason behind this creation was the victory celebration of conquering Gujarat by Akbar. 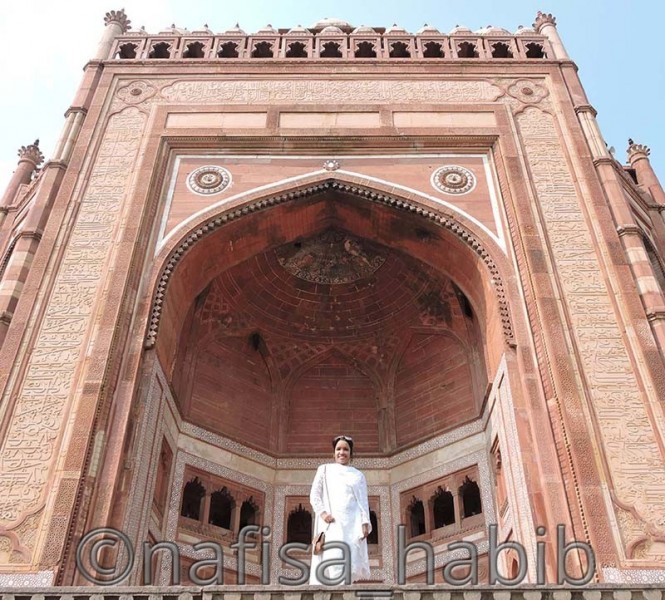 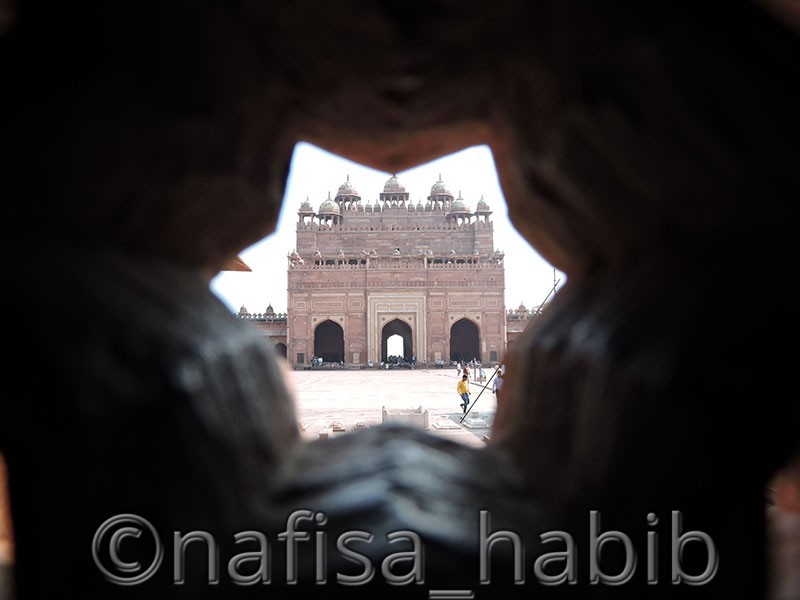 You can see this shrine is made up of white marble, and the overall design is catchy as well. Every year, many devotees visit the tomb of the Sufi Saint Salim Chishti (1478 – 1572) to fulfill their wish. The beauty of Marble Jalis in the windows is fascinating. It is followed or trusted that if one tie a wish thread in the window of this shrine, his/ or her wishes will be fulfilled. And this is called Mannat Ka Dhaga. My local guide told once your wish fulfilled you have to untie that thread, and it’s good if you made a visit again. I loved that to know, and it’s a believe 🙂 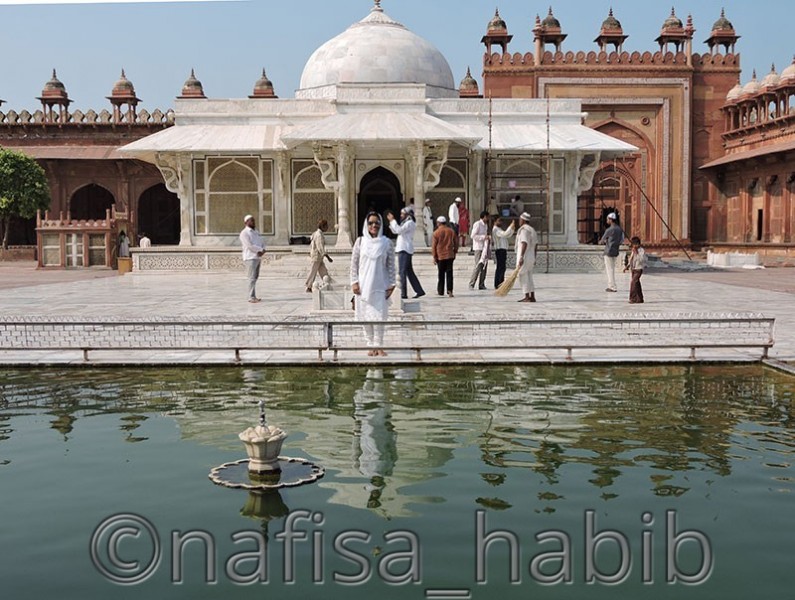 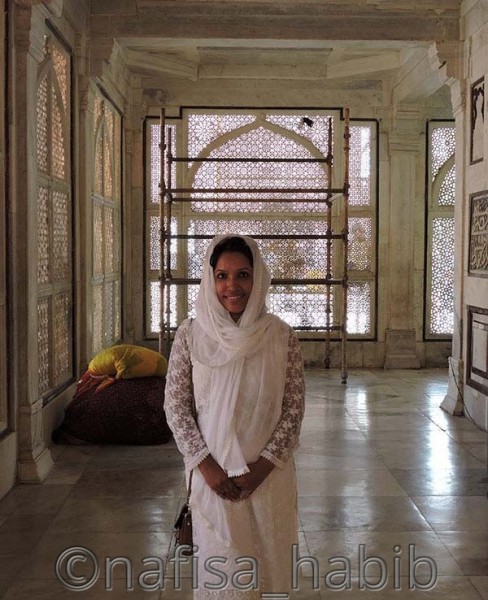 Jama Masjid is the oldest mosque, and the Dargah is located in this area. This one built in between 1571 and 1572. Muslims do offer their prayer (Namaz) here, and the architectural design of this mosque is the finest as well.

Panch Mahal is five-storied palaces and very beautiful to look from the outside. Definitely, one of the loveliest architects inside the Palace Complex. It is mainly made for all Mughal ladies here. The whole palace structure supported by 176 columns, including every floor. 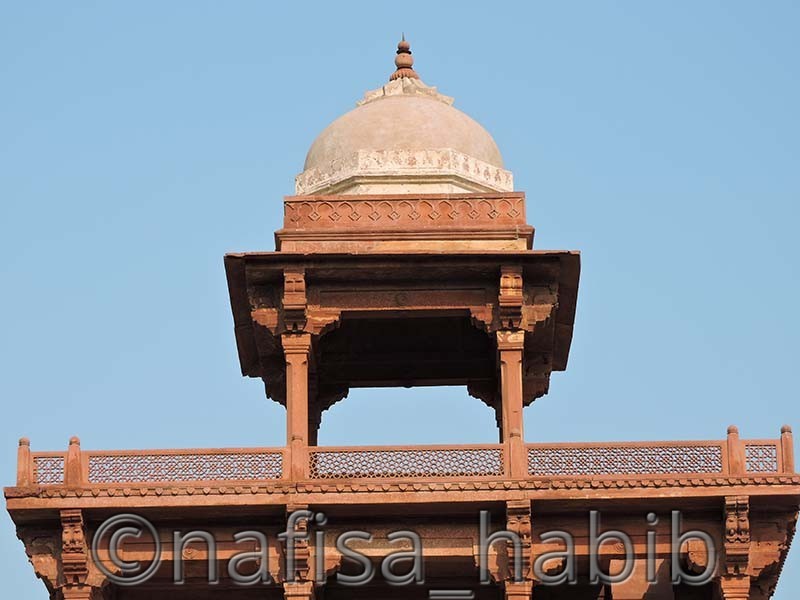 There is one small pond named Anup Talao in front of this palace, and it creates an extra beauty of this architect. In the middle of this lake, there are four bridges and one platform. On that platform, many musical programs performed to entertain the Mughal dynasty.

The Private Hall of Audience or Diwan-i-Khas you can find in every Mughal Palace. However, here it is different and became more popular because of the Central Carved Pillar inside the hall. It is an exceptional beauty and draws more tourists at the side only for this floral like an architect. Akbar the Great did use this hall for private discussions about many religions and faiths with the audience. 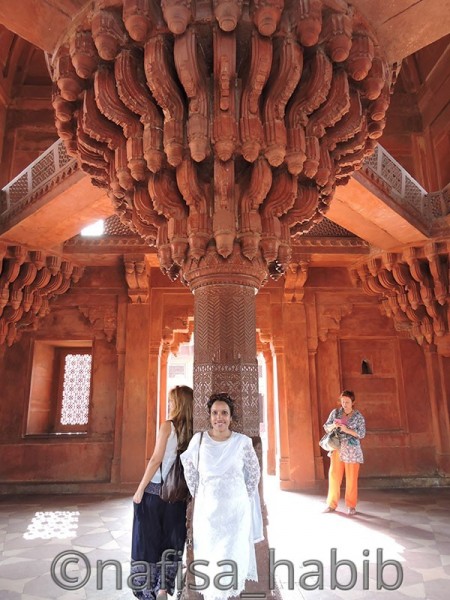 Pachisi Court is called the Court of Games. This court was used to play the Pachisi game by the Mughal dynasty. This game is similar to Chess or Ludo. One of the attractions in the palace complex and I just loved sitting here and was thinking that I’m playing too 🙂 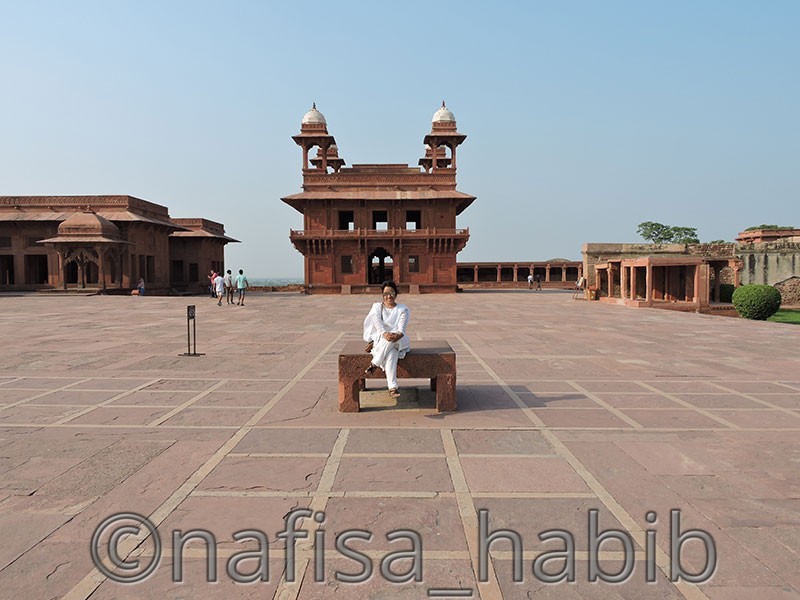 Besides those top places, three houses or Mahals of Akbar’s Muslim and Hindu wives are must visit too. These palaces are known as a Turkish Sultana’s House, Mariam-uz-Zamani’s Palace and Jodha Bai’s Palace. Here every palace got unique floral designs with decorative styles. 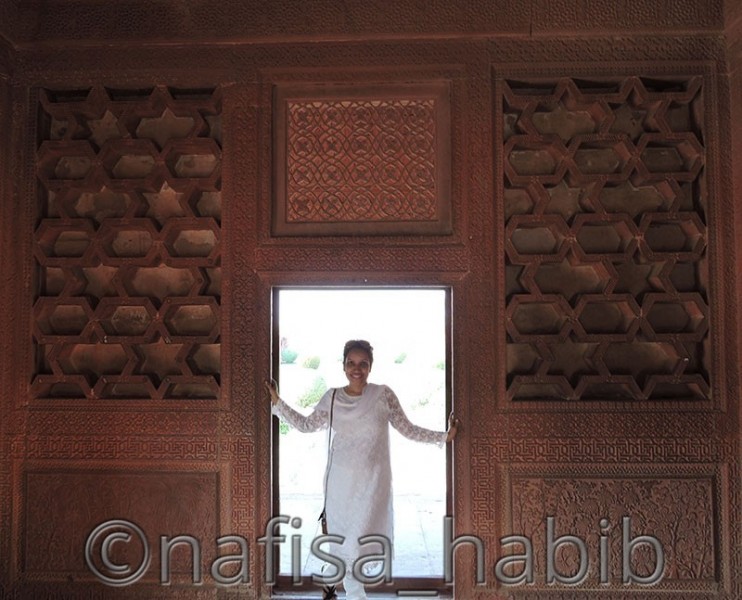 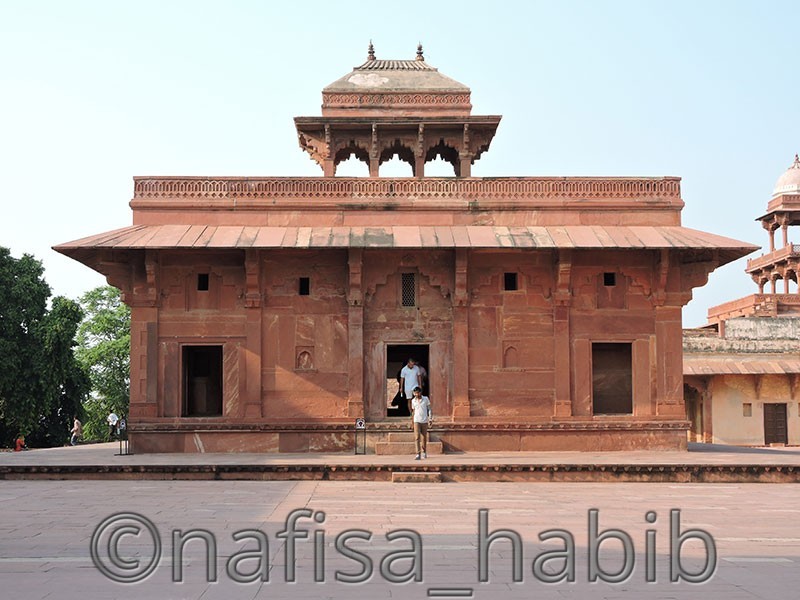 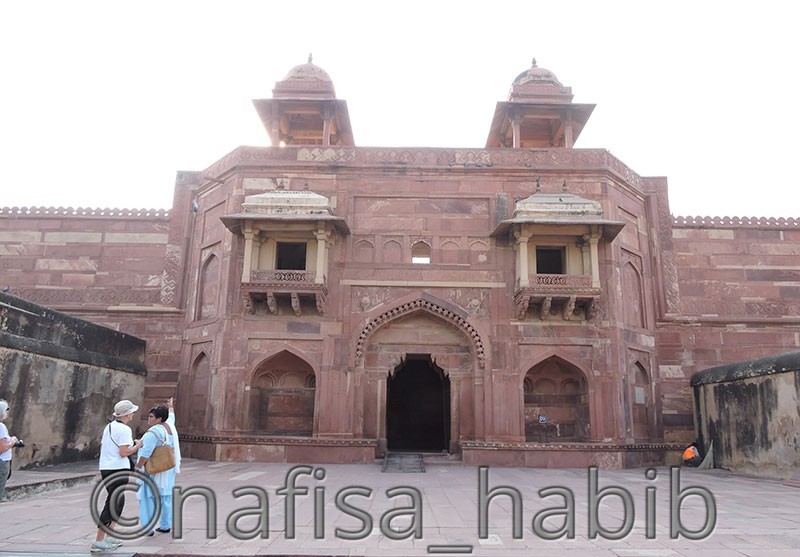 There is one Hall of Public Audience or Diwan-i-Am. This building has used by Akbar for public discussions for the audience. A visit here can be made too.

Overall, the inside history and the beauty of red sandstone architects made Fatehpur Sikri one must-visit tourist attraction in India. It will definitely take you to the fascinating ancient Mughal era. 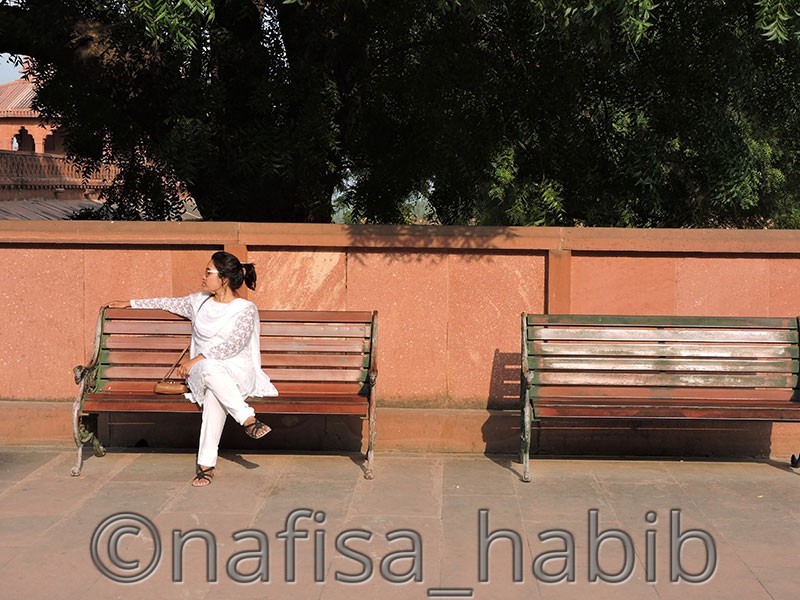 Akbar Palace Complex [Back to the ancient Mughal era] 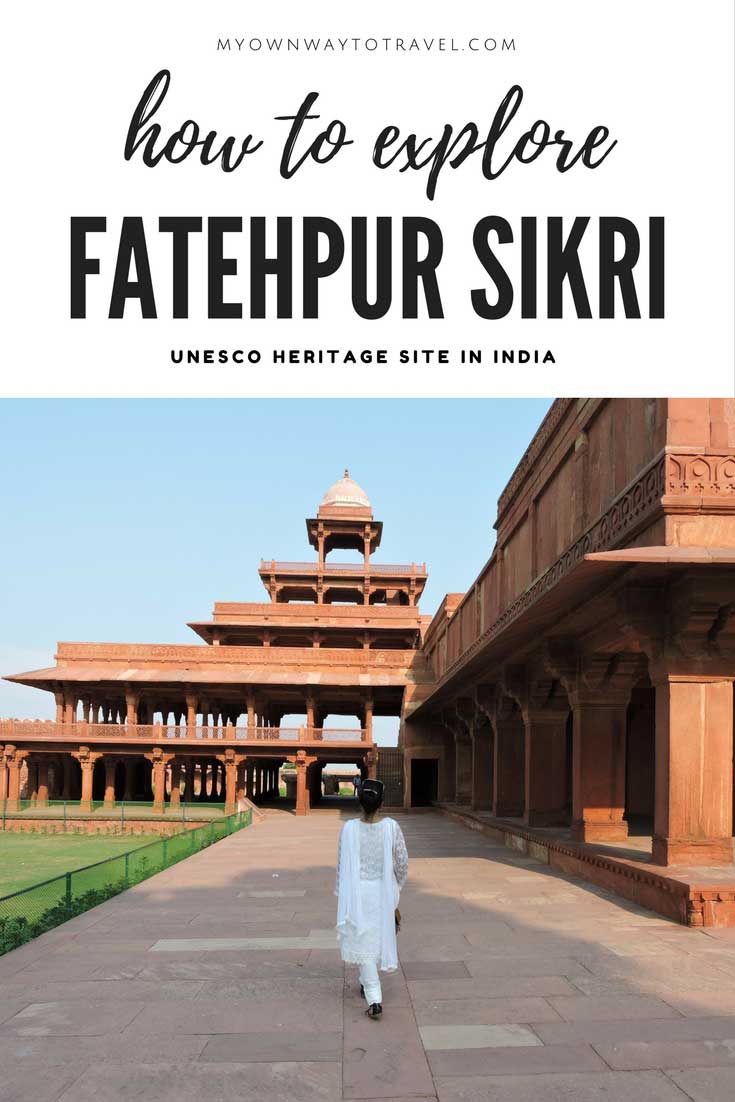 My next post will be on Raja Man Singh Palace in Jaipur, Rajasthan. So stay tuned.

I will love to know. Have you been to Fatehpur Sikri? How did you love this City?

Hi, I’m Nafisa Habib from Bangladesh. I’m with My Own Way To Travel to inspire solo travel and motivate all through the journey. Read More

Mediterranean Sea Front of Alexandria from the Corniche