Bangladeshi cuisine is that hidden treasure of the culinary world that is just waiting to be discovered. Often overlooked under the shadow of its neighbor – a culinary giant of Indian food – Bangladeshi food is the way to go if you love spices and seafood.

And you’re in luck if you find yourself in Cox’s Bazar – one of the best places to be for a seafood lover in Bangladesh.

As a result of this diverse history, Bangladeshi cuisine has become a reflection of all the cultural influence it experienced over time. Many Bengali dishes are shared across borders with its neighboring sister state of West Bengal as well. However, the significant difference is that the Bangladeshi diet is mostly meat due to the Muslim majority.

The majority of the Bangladeshi diet is comprised of curries served along with bread like Naan, Parathas, and Roti. it should come as an unsurprising fact as Bangladesh is a South-Asian nation. It is also the 4th largest producer of rice in the world. As a result, rice is also a principal part of the diet here and is again eaten majorly with curries.

Dhaka, the current capital of Bangladesh, also served as the Mughal capital of Bengal Subah. Spices are very prevalent in local dishes, which can be traced back to its Indian roots. It is reflected in the usage of rich and aromatic spices in cuisines like Biryani and Korma.

Halal meat is pretty much the only meat found in Bangladesh due to its Islamic population. It also means you can find all kinds of meats in Bangladeshi dishes, except for pork in Bangladeshi cuisine.

Seafood in Bangladeshi cuisine is ubiquitous here since Bangladesh overflows with rivers and is surrounded by the Bay of Bengal in the south. However, there is no shortage of usage of vegetables and lentils as well since Bangladesh is a low-income country and not everyone can afford meat.

Cox’s Bazar is a famous tourist destination in Bangladesh known for harboring the world’s longest beach. A 125-kilometer-long sprawl of sandy Cox’s Bazar Beach is well maintained, and you will rarely find any litter despite the beach witnessing a massive footfall every day.

There is no shortage of beach accommodation, and you can easily find a hotel room or resort near the beach at any given price point. From affordable rooms to luxurious resorts, there’s something for everyone. It is also pretty easy to travel to and can be reached via road or air from Dhaka and Chittagong. 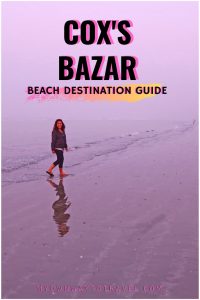 The best way to spend a day or two in Cox’s Bazar is to experience the local Bangladeshi delicacies of which there are plenty. Being on a seashore, there is an abundance of seafood stalls and restaurants here serving various Bangladeshi cuisines made from fishes, crabs, octopuses, and more.

For people traveling to Cox’s Bazar for the first time, it can be a task in itself to find a good eating place and decide what to eat. However, you can always take help from the following list of must-try food in Cox’s Bazar below:

Ilish, aka Hilsa, is undoubtedly the most popular fish in all of Bangladesh, and one of the variations of this fish is also the country’s national food. Since Cox’s Bazar is a coastal town, the most popular dishes here comprise seafood for apparent reasons.

And your Bangladeshi seafood experience can never be complete until you have tried at least 2 or 3 different variations of Ilish fish dishes, like:

This is the national cuisine of Bangladesh and can be found in pretty much any restaurant all over the country. The dish is made by wrapping a marinated Ilish fish in banana leaves before steaming or roasting or shallow-frying it. Marination is done using a combination of ground spices and ingredients like turmeric, mustard paste, and chili paste or chili peppers.

The cooked fish is generally served with white rice and makes for a great lunch before taking a long nap on the beach.

This variation of the Ilish is made using a thick broth in which mustard seeds and spices such as turmeric powder, cumin, green chilies, etc., are added before adding the fish and simmering it.

It is more savory compared to the one above due use of extra spices and is again served with rice on the side.

Panta Ilish is a dish usually served during the Bangladeshi New Year known as “Pohela Baishakh.” The plate comprised “Panta Bhat,” a type of cooked and soaked rice and fried Ilish fish.

The fish is again seasoned with typical Bangladeshi spices like turmeric, chili powder, and other ground spices before being fried. The dish is topped with chili peppers, onion, and tomatoes before being served.

Where to Find: Shalik Restaurant and Biryani House

“Bhorta” (Or “Bharta” as it is called in the neighboring state of India), is practically any dish in which the main ingredient is mashed before being cooked. The term “Bharta” literally means a mashed mixture. It is a trendy dish all over Bangladesh and can be cooked using either vegetables like eggplant or potatoes or even fish and prawns.

The simplicity of this dish is what makes it so popular. It is also very savory and has a base made of several spices like herbs, garlic, onion, turmeric, and red chili powder. The main component can also be steamed or grilled before mashing it and mixing it into the base. The dish is best enjoyed with rice or as a side dish with something like Panta Ilish.

Where to Find: Poushee Restaurant

The cutlets can be made using almost any meat or seafood, but fish like Bhekti, Tuna Fish are usually used in its preparation.

Also, the fish cutlet from Loitta Fish can make for an excellent companion snack for your evening tea on Cox’s Bazar’s beach while you watch the beautiful sunset.

Where to Find: Palongki Inani

Macher Jhol is another prevalent dish in Bangladesh – eaten in almost every household and served in nearly every restaurant. The dish is a spicy fish stew made using fishes like Rohu, Ilish, Seabass, and Bhakura along with vegetables like eggplant and potatoes.

The dish is made using minimal spices and is often very spicy. The broth of the stew is made from a base of spices like cumin, turmeric, coriander, and mustard seeds, and onions and tomato purée are added to give it extra flavor, sourness, and thickness. The fish is then cooked in the broth to make a curry that will feel heavenly when eaten with rice. It is another great dish to eat before spending a lazy afternoon in Cox’s Bazar.

Where to Find: EFC – A Live Fish Restaurant

Biryani is a dish not exclusive to just Bangladesh. It is a highly famous cuisine all over the globe and is mostly conceived as Indian cuisine. However, Biryani is an inherent part of many South-Asian cultures along with Bangladeshi cuisine.

Biryani in Bangladesh is influenced by Mughals who also brought with them Persian and Turkish influences. The usual way of making Biryani here is pretty much the same. Layers of rice, meat, and spices are steamed together in a clay pot to make a flavourful dish that almost everyone will enjoy.

Where to Find: Hossain’s Biryani House

Bangladesh has a rich history and a vast culinary culture. It would be impossible to include all the local cuisines of Bangladesh in one list. Bangladesh also has a variety of geographic features which make the local cuisine different in different parts of the country. While people on plains eat more rice and wheat-based food, people on hills rely primarily on meat. The cuisines in coastal areas like Cox’s Bazar are heavily seafood-oriented.

It means that the best way to enjoy Bangladeshi food is to eat what is most prevalent in your area. And the dishes mentioned in this list are the must-haves in that category! So naturally, while in Cox’s Bazar, you should try to enjoy as many seafood dishes as possible to make the best out of your stay. 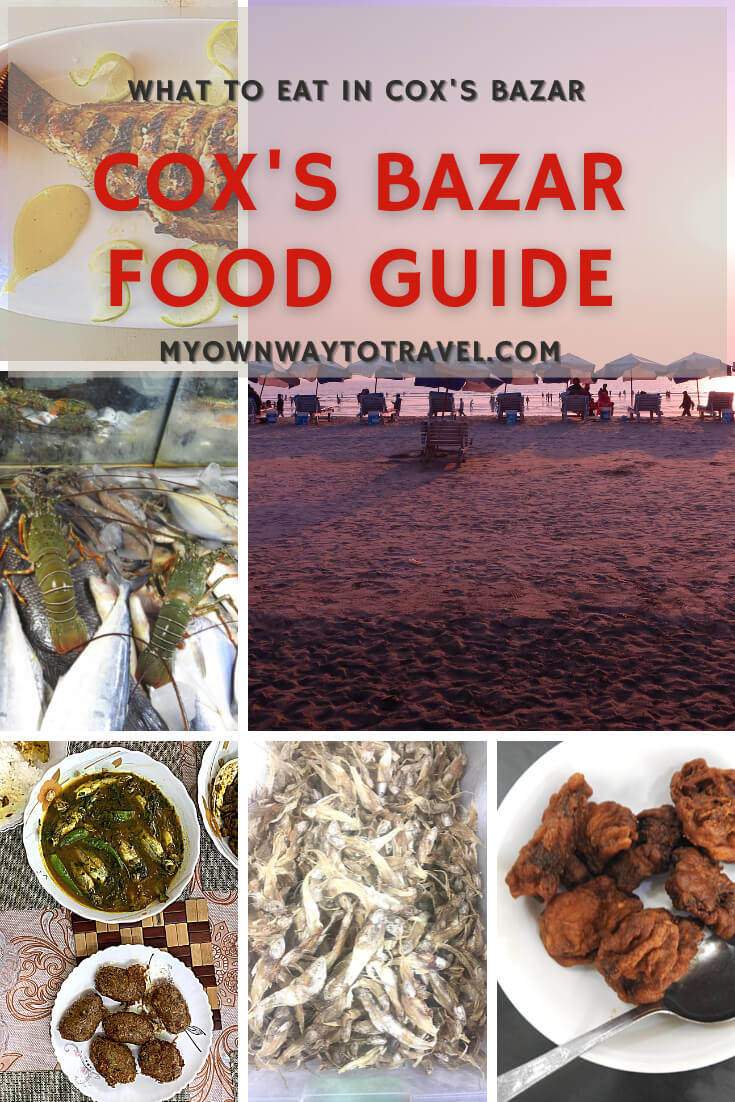 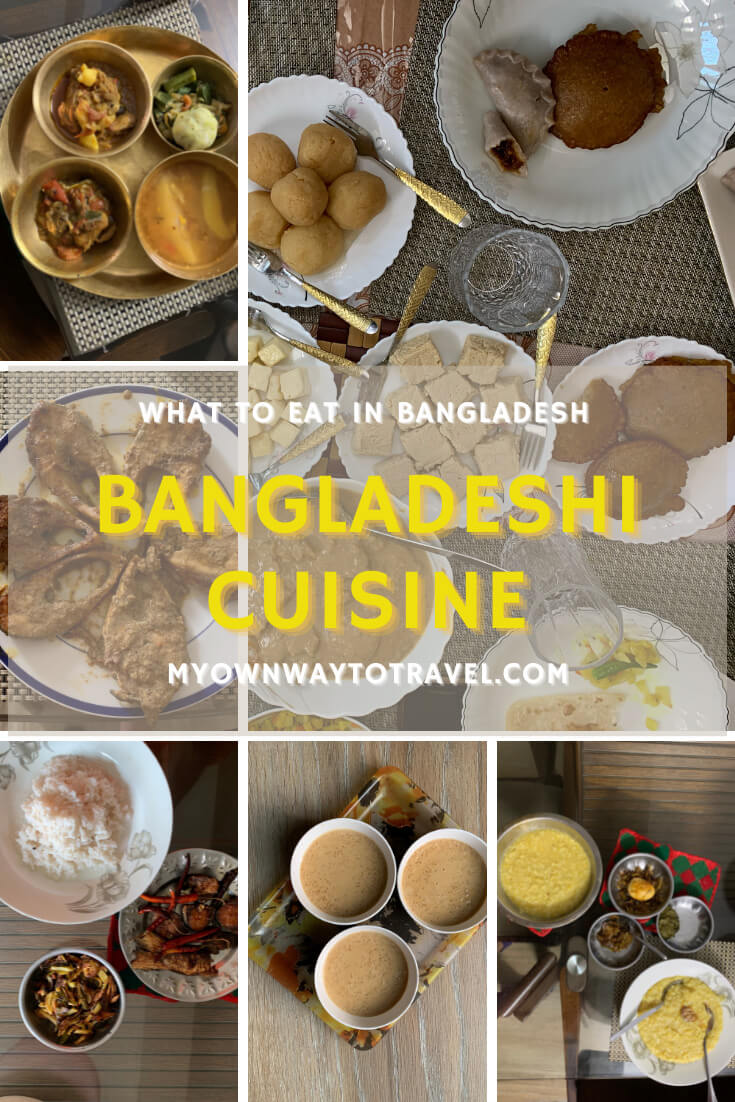 Have you been to Cox’s Bazar? Share your favorite food menus from Cox’s Bazar Beach destination.