The importance and beauty of Agra Fort are unknown and overlooked by many of us in the City of Taj, Agra. If you’re in Agra, Uttar Pradesh, then this glorious fort can be added also with a Taj Mahal visit. I went to explore and found it as another finest Mughal Architecture in Agra, India. Agra Fort built by the third Emperor Akbar during 1565-1573 and took eight-years-long time. This architect is also listed as the World Heritage Site by UNESCO.

Agra Fort carried much importance to the visitors or tourists now because of the remote view of the World Seven Wonders, Taj Mahal. There are many buildings, palaces and mosques are inside the fort to visit. Most of the architects were built by Akbar but some constructed and reconstructed by Jahangir, Shah Jahan, and Aurangzeb. So, how to explore Agra Fort? Grab more inside.

The red sandstone fort is located on the Yamuna river and also mixed with white marble made by the Emperor Shah Jahan. This fort is used to be an important place where from the first Mughal Emperor Babur to Aurangzeb stayed. The country governed from here and Emperor Akbar mainly made it for military activities and later Shah Jahan used it as a mansion or palace. Many dignified visitors from many countries have visited this fort. At present, some parts use for military activities as well.

Agra Fort Facts (Past and Present)

Agra Fort is also known as Lal Qila or Red Fort in Agra. In the early era, it was called as Badalgarh Fort, which made up of brick and then rebuilt by Akbar with red sandstone. There were total four gates to enter the fort named Delhi Gate, Lahore Gate or Amar Singh Gate, Water Gate and Darshani Gate. However, among four, two closed where the Delhi Gate is not allowed for public use, and the Amar Singh Gate is the most popular one and used by all tourists. 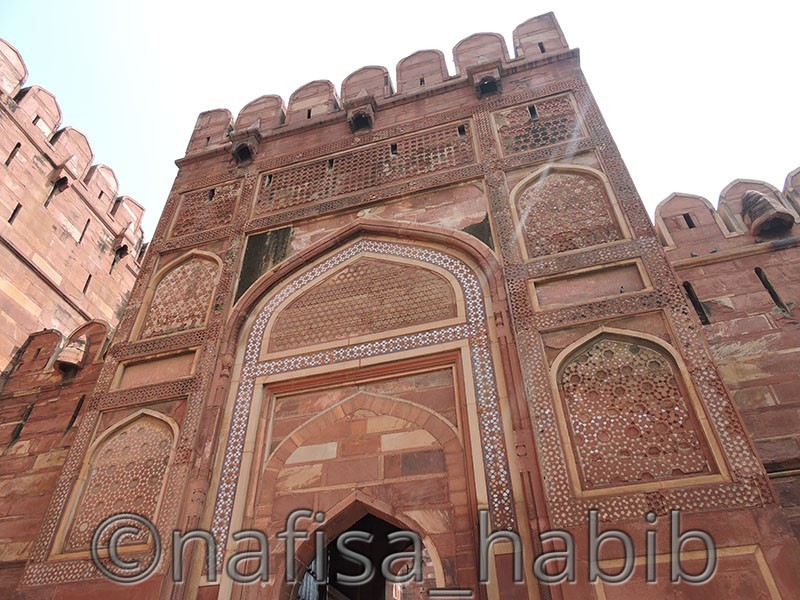 This important fort during the Mughal period is surrounded by 73 meters strong defensive walls. There were two natural waterways (inner and outer) where no water can be found in the inner one now, and the outer waterway changed to a public pathway. It is said many crocodiles and tortoises used to keep in those waterways to protect from the foes.

The history said there were almost 500 monuments inside the fort. However, later, many rebuilt by Shah Jahan and destroyed by the British rulers. Now, almost 30 monuments are there and among those, some are more famous and popular tourist attractions.

After taking an entrance by the Amar Singh Gate first, you can see the red sandstone beauty of Jahangir Palace. It was made by Akbar for his son Jahangir (Salim). This palace took attraction because of the combination of Hindu and Islamic architectural design. 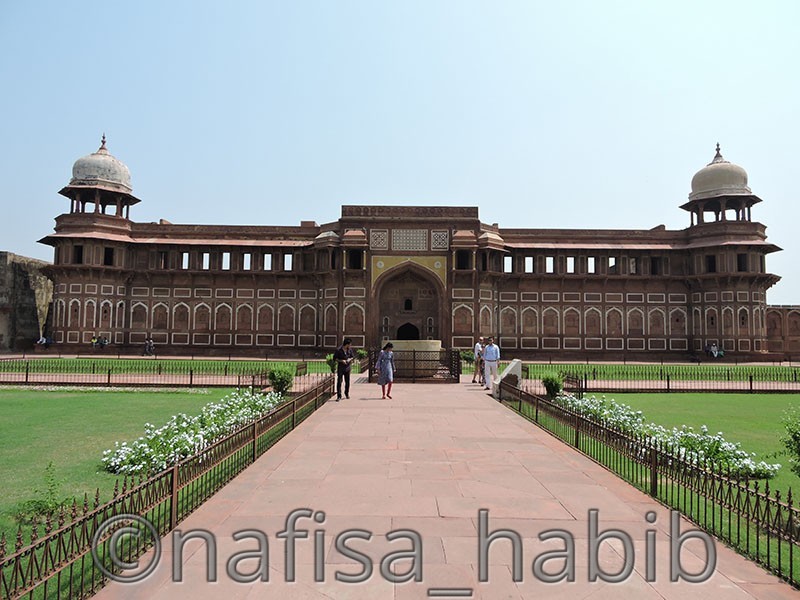 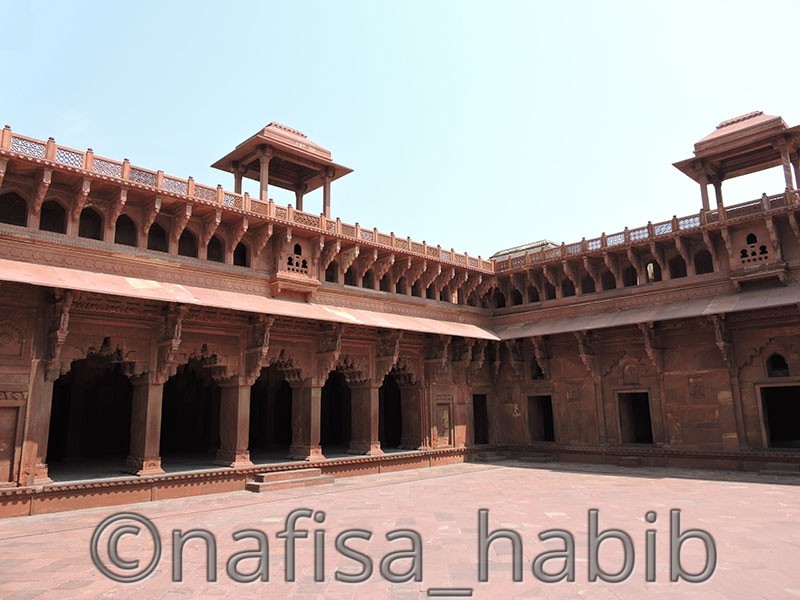 There is one big stoned bowl (Hauz-i-Jahangir) placed in front of this palace, and it is said that Jahangir used it for bathing, which did fill with water and rose petals.

There was one temple inside the Jahangir Palace and later destroyed by Emperor Aurangzeb. Here is the Jodha Bai Palace also, built by Akbar for his wife Jodha Bai. From this palace, the remote view of the Taj Mahal is visible as well. 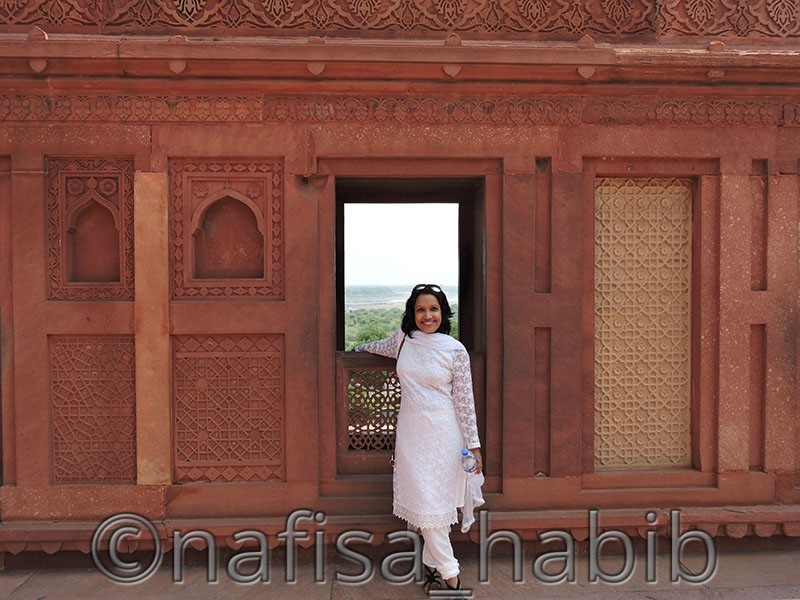 The Hall of Public Audience or Diwan-i-Am constructed by Akbar too, later reconstructed by Shah Jahan with beautiful marble artworks. Here I can see the resemblance with this architect with the Amber Fort (Raja Man Singh Palace) Diwan-i-Am. A combination of beauty with Mughal and Rajput architect styles. 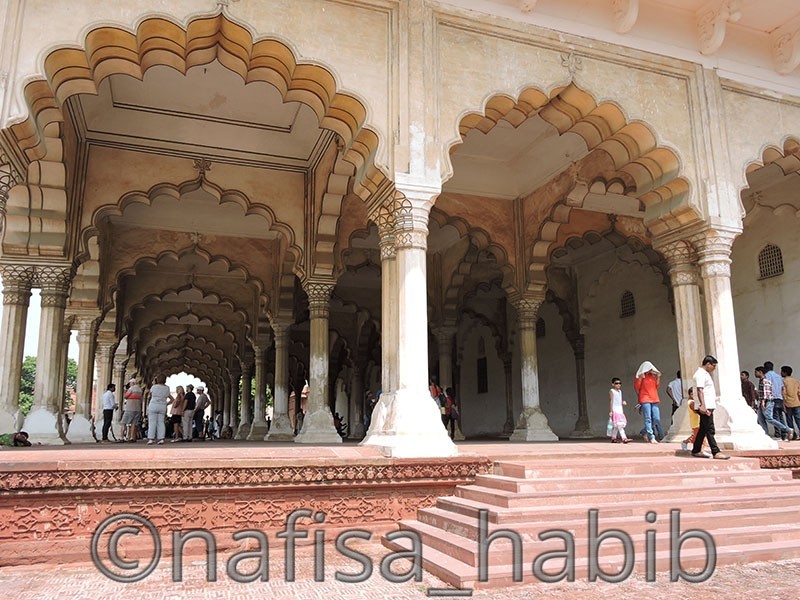 Mutahamman Burj is also known as Octagonal Tower and this is the place where the Emperor Shah Jahan imprisoned by his son Aurangzeb for eight years. From the terrace of this tower, Shah Jahan did use to see the Taj Mahal until his death. Now, this spot is much popular for every tourist here. 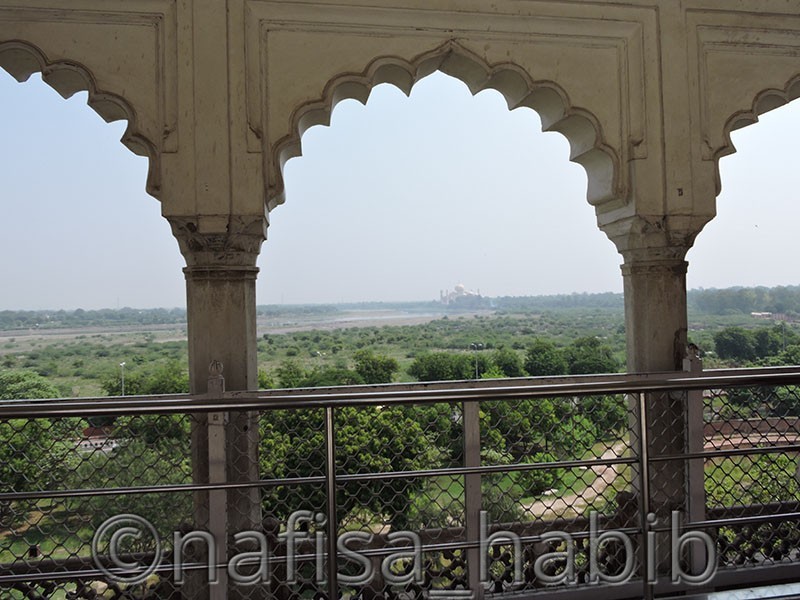 Taj Mahal View from the terrace of Mutahamman Burj

Samman or Mutahamman Burj was built by the Emperor Jahangir and later reconstructed by Shah Jahan with the beauty of stones and marble work. 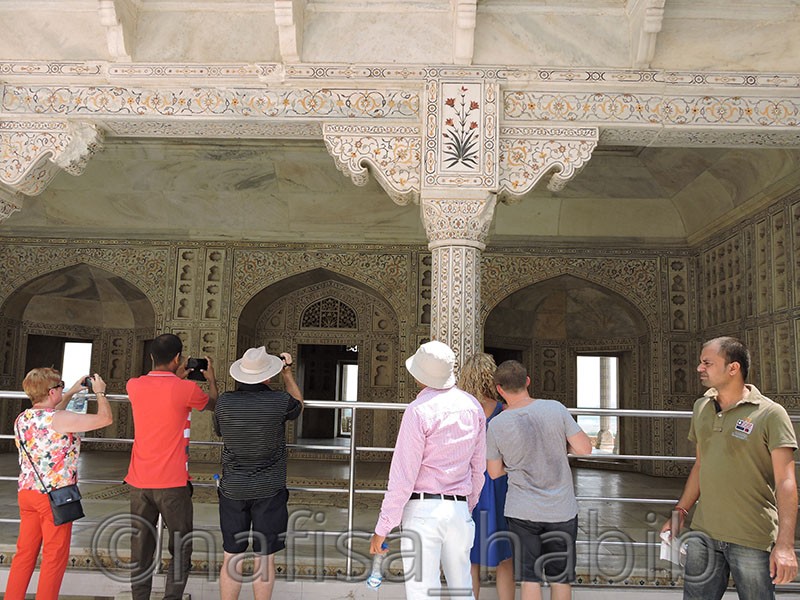 The Beauty of Mutahamman  Burj

Sheesh Mahal is mainly made for all Mughal ladies inside the fort. This palace followed the style of the Turkish Bath. The Emperor Shah Jahan built this with beautiful small mirrors and precious stones. Tourists are not allowed to enter now. Just able to see from the outside of this palace, and it seemed how beautiful it is. 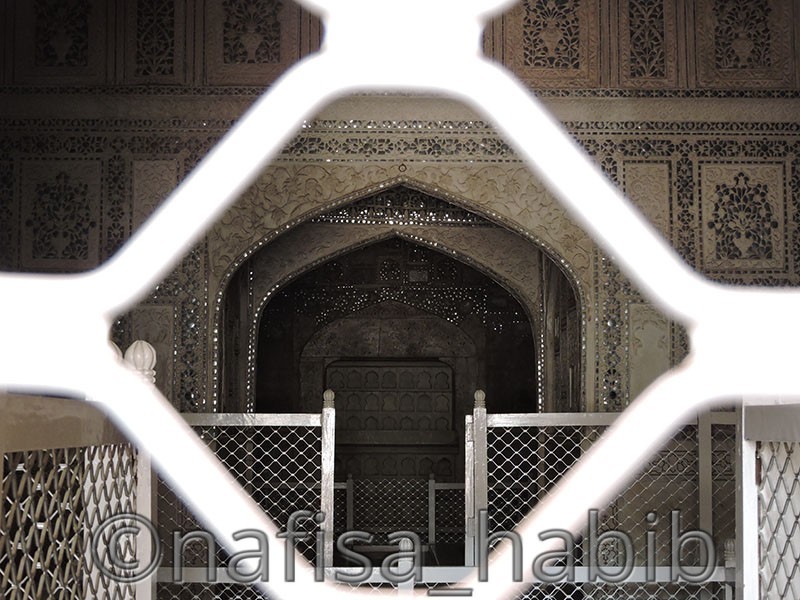 The Pearl Mosque or Moti Masjid is another beautiful creation by Shah Jahan with the uses of white marble. This mosque used by both Mughal gents and ladies from different gates. Some precious pearls used on the domes of this mosque and so became popular by this name. 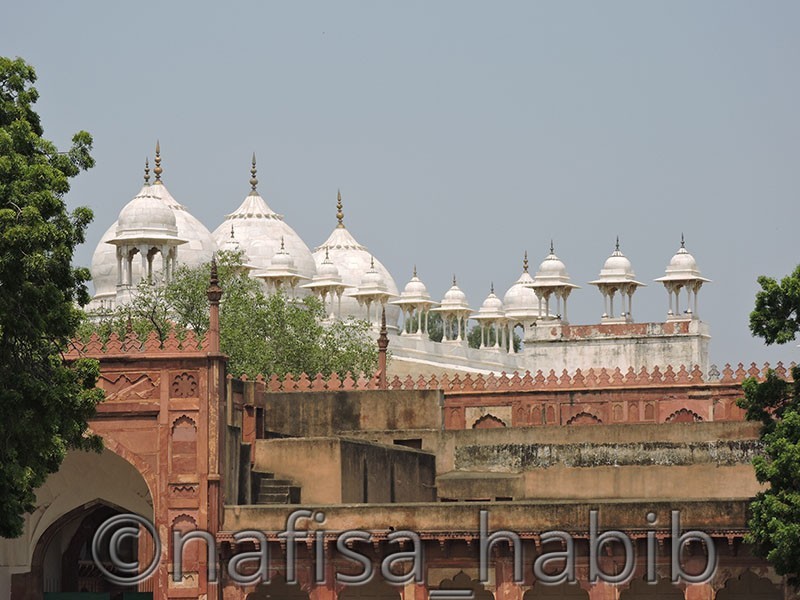 Despite every protection and power by the Mighty Mughals, this Symbol of Power finally captured by the British in the 18th century. However, still, this fort standing as a living example of power with dignity. Will you like to explore this historic fort? 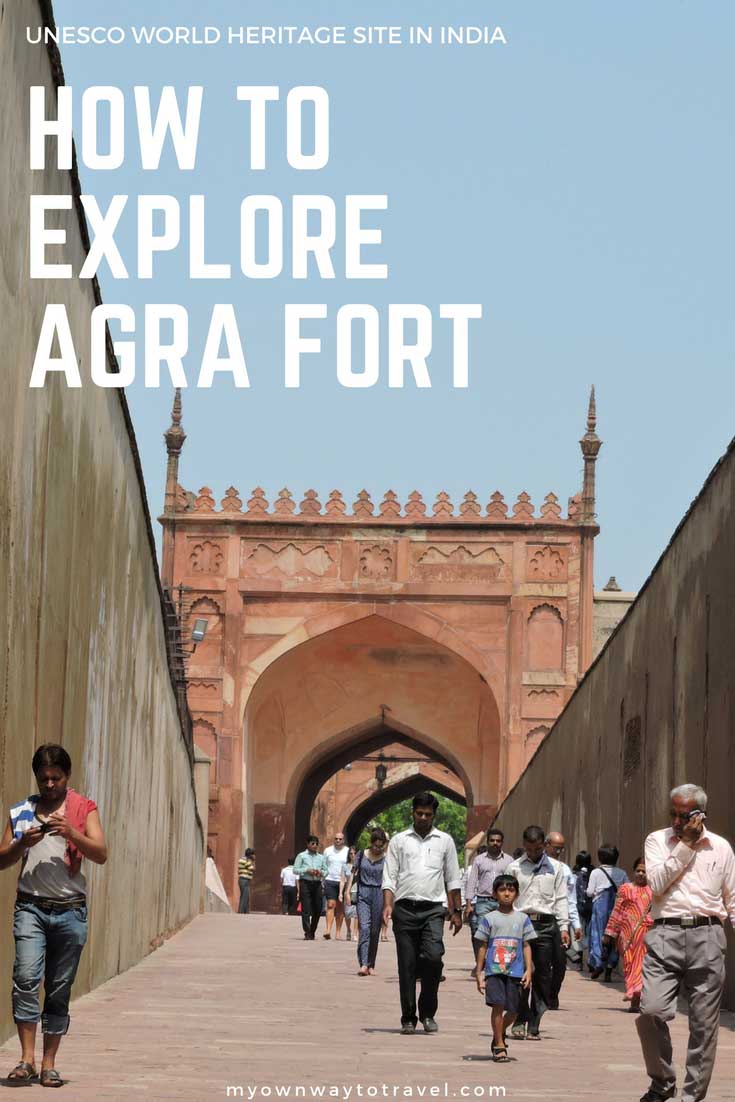 One thought on “Agra Fort: Another Finest Mughal Architecture in Agra”