Among many top destinations in Sylhet, Lawachara Rain Forest is a must-visit for all adventure lovers. Lawachara is one of the largest lush green forests in Bangladesh. Lawachara Rain Forest, this name sounds perfect to me while exploring during the Rainy Season. I also had no idea it could be such adventurous to explore with the sound of raindrops. How To Reach Lawachara Rain Forest?

The total area of the Lawachara Rain Forest is 1250 hectares. Lawachara Forest is located in Moulvibazar but very near to Sreemangal. It takes just 30 mins from Sreemangal (almost 13 km). In my recent Sylhet tour, I had visited Lawachara from Sylhet. It was definitely amazing, just green and green on both sides of the road in Sreemangal. The distance of the forest from Sylhet is almost 90 km. You’ll start loving the lush green walkway which leads to Lawachara Rain Forest. There are many convenient public transport services to help you to take Sreemangal. You can either enjoy your journey by road or by train. But when you reach the destination it is always recommended to take one well-experienced Guide with you to enjoy the real adventure at Lawachara Rain Forest.

You’ve to pay some amount for an entry ticket to visit Lawachara National Park. And the amount varies on timings (Half an hour – Three hours) and the type of tourists (Native and Foreign).

This is one short video clip to explore Lawachara Rain Forest. Due to heavy rain, I couldn’t record videos of every part of this adventure. Just some glances to inspire you before reading inside.

I was lucky enough to be guided by Eusuf Ali (Freelance Tour Guide). He is a highly professional and well-trained Guide. He helped me a lot to explore Lawachara Rain Forest. I had no idea about many offbeat paths in this forest. Normally tourists are not familiar also and so one should take the help of Guide to explore all of this destination in South Asia, Bangladesh. Eusuf informed me that there are many paths to enter the forest. It takes at least three days to explore the whole forest. But in three hours he tried to show all the main attractions and it was quite interesting to know many unknown facts about Lawachara National Park. It was drizzling and the whole atmosphere was adventurous and different. While hiking found many spider nets and came to know about Giant Wood Spider. It was huge in size though was not the adult. All About Lawachara Rain Forest

In a true sense, Lawachara Forest is known as Evergreen Forest. The total forest is occupied by many trees. There are 167 species of different common and rare plants at Lawchara Forest. I saw many types of bamboo trees around the forest, and one named in Bengali as Mrittika Bansh (Bamboo).

There are many tall trees, where Chapalish Tree (Artocarpus Chama) was much common. The fruit of this tree is edible. And came to know many Tribals inside the forest collect those fruits and also Fig Tree (known as Ficus in Asia) fruits to eat. You’ll see many orchids, herbs, and shrubs as well. But I mostly loved to see many species of Fern at Lawachara. Especially Tree Fern was very interesting to me. And I was too happy to see various Mushrooms, seemed like blooming flowers. 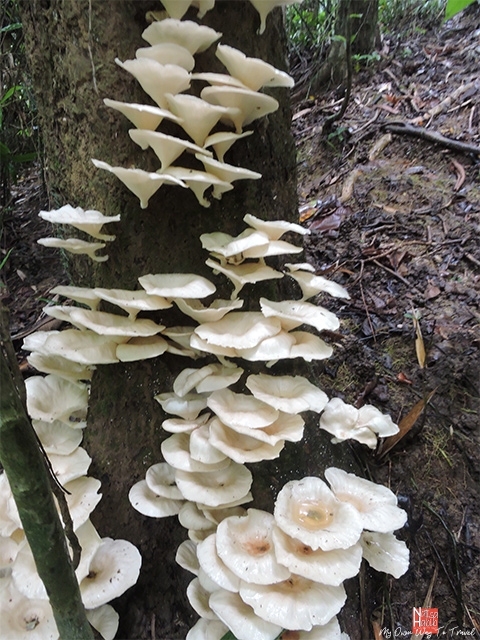 Once started to rain heavily so it was quite risky to hike for some slippery paths. I didn’t face any problems with proper guidance. But first time got attacked by many leeches, which sucked blood while hiking, and I couldn’t even understand. Hehehe! I should use hiking shoes or boots.

Due to heavy rain, I couldn’t see different animals at Lawachara Rain Forest. There are many species of animals including Wild Pig, Barking Deer, Gibbon, Capped Langur, and Monkey. But Gibbon is the main attraction at Lawachara Forest. Many foreign tourists visit this forest for seeing Gibbon. And I came to know the early morning chances is there to see Gibbon, during that time they make noises. There are probably 8 species of monkey including Gibbon. I saw many foot signs of Wild Pig, they rooted out the ground of many bamboo trees. It was nice seeing one cutest Capped Langur for the first time. Besides animals, there are total of 8 species of spiders, different snakes, birds, and insects at Lawachara Forest.

We crossed one old wooden bridge inside the forest before exploring another top attraction at Lawachara. Yes, it was the tallest African Teak Oak Tree (Chlorophora Exelsa) This tree is much popular and available in the Africa continent but rare in Asia. There were two trees in this forest but one fell long ago due to the heavy storm. Here you can see many tall and big trees and the walkway is beautiful and much familiar and popular with all tourists. Overall, it was nice walking through the Bamboo Groves. 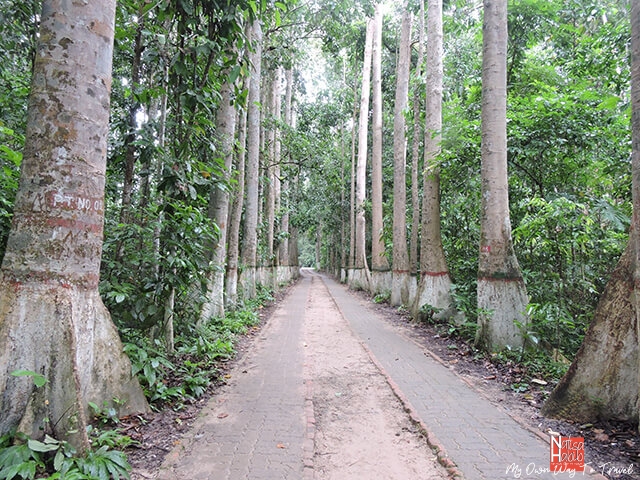 Beautiful walkway of the Lawachara Forest There is one tea stall at Lawachara National Park, I had 7 Layers of Colored Tea and was great to know the fact about this tea. But don’t shake while sipping, else it turns into one color.

This stall is just beside the Lawachara Railway, the filming location of Around the World in 80 Days movie. This Hollywood movie was released in 1956 and this spot became popular among tourists at Lawachara National Park. Around The World in 80 Days Film Location

We also visited one Lemon and Naga Morich (Hot Chili Pepper) gardens at Lawachara Forest. I took some lemons. I have got a serious fascination with any citrus fruits.  And Eusuf had 6/7 hot peppers at the last night dinner, he is habituated to it. OMG!

There are many villages within the area of the Lawachara Forest. And mainly Tribals do stay here. Some common Tribals here are Manipuri, Khasi, and Tipra. I liked visiting one Christian Khasi Tribe village. It was great knowing tribal lifestyle. Here Betel Leaf plants are very common and also saw many citrus trees and different flower trees. The Khasi peoples were very good to talk and served us Pomelo, which is known as Jambura in Bengali. Many Tribals’ lifestyles became changed in Sylhet. They are now well educated and can communicate in English besides their local language. I found some of them talking in Japanese. Many of them were relatives of my Guide Eusuf, and so it was easy knowing much about their lifestyle.

After that, we started to hike in the stream way, where both sides of the stream found spiky plants and also many Fern trees. The real attraction here is the old entrance which is known as Emperor Gate. This old and historic architect was established during the British rule in East Bengal which is now Bangladesh. Share your thoughts. What will you like to explore at Lawachara Rain Forest? For more queries, you can write to me as well.

One thought on “Three Hours Adventure at Lawachara Rain Forest in Sylhet, Bangladesh”